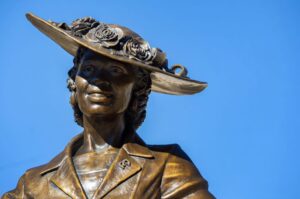 In 1993, alumna Kathleen “Kay” F. Hufford Esmiol (B.S. ’60) and her class in Colorado Springs, Colorado decided to pay tribute to a local legend, Fannie Mae Duncan. Little did she know that this decision would set off a series of events that would lead to her inspiring her students to embrace diversity and promote inclusion. For those not familiar with Fannie Mae Duncan’s story, she was a Colorado Springs legend and an important figure in the Civil Rights movement. After moving to Colorado Springs in 1933, Duncan started her career as an entrepreneur, opening up a soda fountain, a United Service Organizations (USO) center, and then the legendary Cotton Club. The Cotton Club hosted some of the biggest musicians of the era, including Duke Ellington, Louis Armstrong, Etta James, Count Basie and many more. What set the Cotton Club apart from many others was its inclusive nature, particularly during an era of racial segregation. Duncan, however, proudly hung a sign in the club’s window that boldly proclaimed, “Everybody Welcome,” which became a phrase closely associated with her. The Cotton Club became instrumental in Colorado Springs’ peaceful integration process. 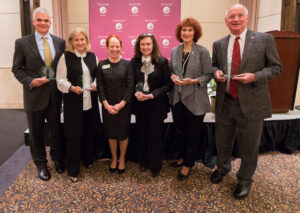 Fast forward to 1993, when the Eagleview Young Writers’ Club, led by Esmiol, decided it wanted to create a play that featured minority students in all the leading roles. Being in Colorado Springs, Esmiol and her students knew they wanted to feature Duncan’s story, so she reached out to Duncan herself to learn more. The two developed a rapport, and Duncan was flattered to be considered as the subject in a play. Eventually, the two women would co-author Duncan’s memoir, Everybody Welcome: A Memoir of Fannie Mae Duncan and the Cotton Club. The play became a success and was performed for more than two years. The success encouraged Esmiol to write and create five more plays, including a play called “Giving ‘Em Wings” about Rosie the Riveters in World War II. The cast of students became so enamored with the story of Fannie Mae Duncan that they suggested they should create a statue honoring the icon. Esmiol and her students decided to donate the $2,000 in proceeds they had earned over their performances towards an eventual statue. It would take 26 years before the vision was realized, but eventually Esmiol’s students had their dreams come true when a bronze likeness of Duncan was installed at a dedication ceremony in October 2019. The statue of Duncan, donor walls and historic tablet are all located adjacent to where the Cotton Club once stood. Esmiol says she hopes that FSU students “realize that no dream is too big to pursue. A vision can be accomplished at any age if you ignore the naysayers who insist that it can't be done.”