The Association for Education Finance and Policy (AEFP) was supposed to hold its annual conference March 19 through March 21 in Fort Worth, Texas. Like many large conferences, the planning committee had spent months of preparation to get the event ready. One of the individuals planning the conference was FSU’s own Patrice Iatarola, associate professor of education policy and evaluation. As president-elect of the association, she chaired the program committee. Like many organizers at the time, she was aware of the coronavirus but was unsure the impact it would have on the conference. At the time, the virus was mostly affecting China, and there were no travel advisories within the United States. Iatarola and the association’s executive committee, however, were keeping an eye on the situation, understanding that things could change very quickly. Ultimately, they made the decision to take the conference online. We interviewed Iatarola to learn more about the process of taking a conference online in the hopes that it could benefit others facing similar situations. 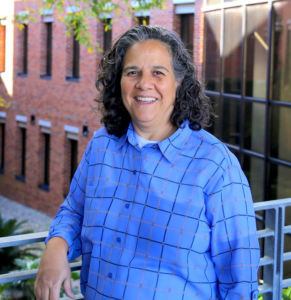 In late February, Iatarola traveled to Washington, D.C. and had the virus on her mind while waiting in the crowded boarding areas at Reagan National Airport. Others on the AEFP board had similar thoughts, and when she returned from her travel, Iatarola received an email prompting the executive team to start coming up with a contingency plan. Things moved quickly after that initial conversation. On Monday, March 9, the executive committee met to discuss a plan. Then on Tuesday, March 10, the full board met and decided to cancel the traditional, in-person conference and take the event online. Over the course of the next eight days, the executive director of AEFP, Lydia Ross, and IT pro, Hiep Ho, worked together to create the virtual conference.

The decision to cancel a conference is not an easy one, particularly when conditions in Fort Worth looked fine. In early March, the Dallas/Fort Worth area of Texas did not have any confirmed cases of COVID-19. However, the team believed that things were going to get worse—and rightly so. “We could not ask people to risk their lives and the lives of others,” says Iatarola. The AEFP team considered what other conferences were doing and recognized they had two choices: cancel the event entirely or go virtual. The choice to go online was not an easy one. “A significant consideration in moving to a virtual conference was the financial risk of a full cancellation and refunding all attendees’ registration fees, as well as facing huge penalties for canceling the hotel room guarantees and associated conference costs that were already committed,” Iatarola explains. Another important consideration that the committee weighed: keeping the community together. “Our association’s conference has always been a welcoming, warm, inviting and encouraging experience for attendees,” says Iatarola. “We did not want to lose that connection that we look forward to every year, and a virtual conference was a way to keep connected.”

Iatarola says that the hardest part of moving the conference online was the rapidly devolving chaos accompanying the spread of the coronavirus. Universities and schools began to announce they were moving online or shutting down, and that affected many of the planning members’ personal and professional lives. The sudden stress of managing both professional responsibilities as well as now having children at home and sheltering-in-place mandates in place called into question the decision of even having a virtual conference. But, Iatarola says that plenty of people stepped up to the challenge and made the event happen. She cites the work of both Ho and Ross as instrumental in moving the conference online.

Two of the reasons why AEFP’s conference transitioned as smoothly as it did was due to the incredible teamwork of leadership and board members and the positive reception of the general membership to the idea of a virtual conference, Iatarola says. The executive team made decisions on the format and what tools they would use. In this case, they decided to use Zoom right away and stuck to that plan. There were only minor technical hiccups that were immediately resolved. Iatarola also believes that the membership accepting the decision also played into the conference’s success. Many of the members still desired to have that connection with their professional peers, and while an online conference wasn’t anyone’s first choice, it was better than nothing. Because of the community’s enthusiasm to the idea, the challenge of moving the conference online became a rallying point and provided an opportunity for teamwork and togetherness. That became a theme of the conference: “We made the conference about our community itself,” Iatarola says. “It’s one of the most significant things that I have done professionally, and to see folks step up and present their work, to engage others—some with children or pets in the room—I think many felt it was a relief of normalcy in a sea of uncertainty.”